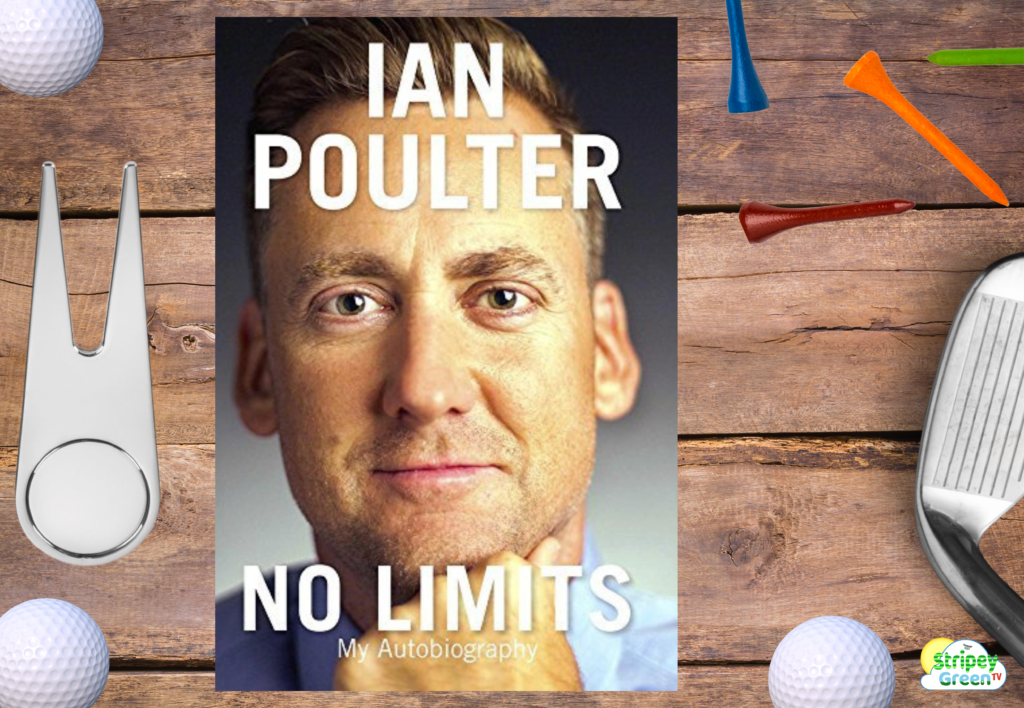 No Limits: My Autobiography

Brief synopsis: Ian Poulter’s Autobiography No Limits is the story of a boy from Stevenage who grew into one of the greatest Ryder Cup golfers of his generation. Released in 2014, No Limits covers some of the most dramatic periods of Poulter’s journey so far. Read how Poulter went from being rejected by Tottenham Hotspur, to becoming an Assistant Professional Golfer, and then global superstar with a Ferrari collection worth more than $25m.

This candid autobiography shows insights into some of the key moments of Poulter’s career, including the making of the Ryder Cup legendary character “The Postman”.

No Limits is very much the story of how Poulter worked hard and achieved his dreams.

“How can you be great mates with somebody but, boy, you want to kill them in Ryder Cup”

Ian Poulter – No Limits: My Autobiography

Ian Poulter is one of modern golf’s most interesting characters. He is a person that people tend to either strongly like or strongly dislike, with little ground in between. For those people who are not keen on his persona, the stories in this book may just change their mind.

This autobiography is brutally honest in places. Poulter’s life story is one that is underpinned by hard work. Whatever a person’s character, it is difficult not to admire those who succeed in their journey, through perseverance and hard work.

Ian Poulter’s autobiography is difficult to read in places, not least because it needs a blooming good proofread and re-write! There are quite a few typos and lots of repetition. That said, it doesn’t take away too much from what is generally a fascinating read. I am not a speed reader, but I struggled to put this book down so consumed it within a week. I particularly enjoyed reading about Poulter’s warmup routine.

There is no denying that Poulter is not the perfect human-being, and this autobiography certainly describes many of his weaknesses and self-admitted faults. Fundamentally, the key message of the story is (as Doc Brown said in Back to the Future) “If you put your mind to it, you can accomplish anything.” Poulter’s story absolutely exemplifies this. He admits to not naturally being the greatest golfer but that his hard work, dedication, and the amazing team he has formed around him have powered him through to success.

But what is success?

On paper, Poulter certainly isn’t the most successful of golfers. In his almost 30-year professional career, he has only seen 17 professional wins. Now admittedly, that is 17 more than me, but for a golfer that has been in the limelight for so long, it is an astonishingly low figure. Poulter IS however a SUCCESSFUL GOLFER.

Why? Success in Golf isn’t just measured on tournament wins, scores, and course records. There is an overall bigger picture. Ian Poulter is a very well-respected golfer, not just from his levels of success in tournaments.

There is a lot of money in modern golf, and a golfer can have a very successful career without finishing 1st in a single tournament. For example, second place in this year’s Open Championship earned prize money of £1.2m. While the money wasn’t quite as high back then, Poulter did finish second in the Open Championship in 2008, and over his career he has earned more than £25m to date. Poulter now has a net worth in excess of £50m ($60m).

But his success is also more than just money. For me, Ian Poulter is most successful as “The Postman.”

Although Poulter’s singles Stroke Play career hasn’t been adorned with trophies, in Match Play Golf it is a completely different story. Poulter excels at Match Play Golf. Anyone who enjoys the Ryder Cup will be aware of Ian Poulter and the legendary “Postman” character. Poulter earned this nickname based on his ability to “deliver” under pressure. The all or nothing format of Match Play golf suits his game, and his SUCCESS in this format is phenomenal. Poulter has two World Golf Championship wins (one in Match Play format, one in Stroke Play) under his belt and an unrivalled, undefeated Ryder Cup Sunday Singles Match Play record of played 7, won 6 and halved 1.

The Postman’s Ryder Cup record in general is legendary, but to be undefeated in seven Sunday singles matchplay appearances is truly remarkable, especially considering the quality of golfers he has come up against. Ian Poulter’s Sunday Ryder Cup record is as follows:

Poulter’s performances have lead to the European team winning five out of the seven Ryder Cup tournaments he has been picked to play in. In this No Limits book, he describes how his focus and drive pushed him beyond the limits to achieve his dreams.

Ian Poulter’s Autobiography is a captivating read, and, in my opinion, a book that any keen golfer should have in their library. As with the man himself, the book is bold, passionate, and colourful.

This book is not all golf. Golf is the narrative that runs through the book, but it is underpinned by Poulter’s personality and his other loves outside of golf, including his family, his Ferraris, his taste in clothing, and the creation of his own brand.

Ian James Poulter is an English Golf Professional renowned among other things for his passionate performances for Europe in the Ryder Cup. Poulter is affectionately referred to as “The Postman” for his ability to deliver under pressure, in particular in his Ryder Cup career. He has appeared in 7 Ryder Cups and remains undefeated in all 7 of his final day singles matches having won 6 and halved 1.

Aside from the Ryder Cup, Poulter has won 3 PGA Tour Titles and 12 European Tour events. With the help of his winnings, Poulter has amassed himself a very impressive collection of Ferraris worth in excess of $25 million!

No Limits: My Autobiography – Hardback

No Limits: My Autobiography – Paperback

No Limits: My Autobiography – Kindle Edition

No Limits: My Autobiography – Audiobook

No Limits: My Autobiography – Audio CD

Spotted any errors in this review or would you like us to review another golf book? Let us know here. Want to add your opinions? Why not add your own review in the comments below.