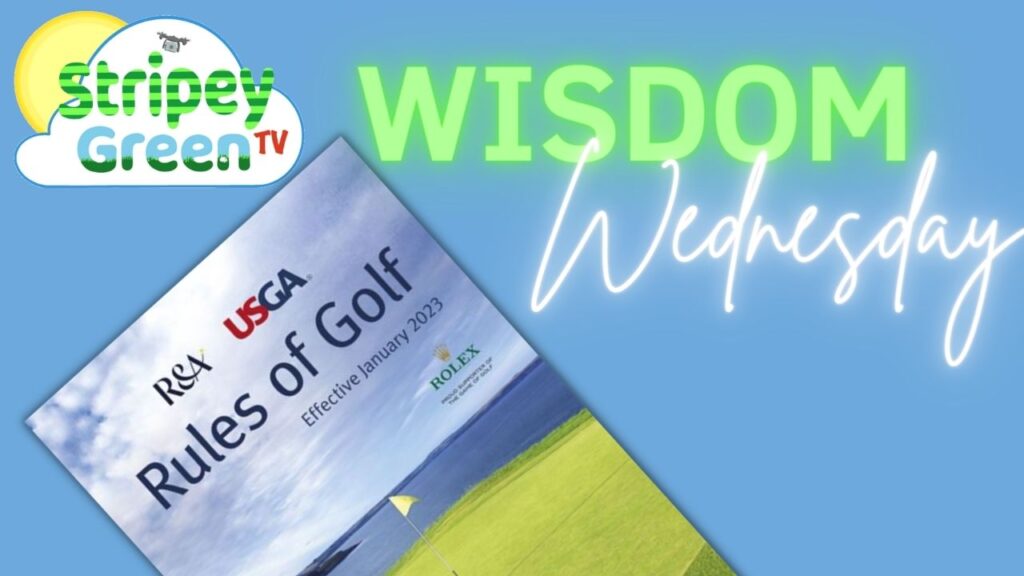 In the second Wisdom Wednesday of the series, we look at the changes to the rules of golf.

The new golf rules for 2023 are additions & changes that once again seem to be driven by a desire to improve the modern game. Something I’ve noticed more recently, and I love, is that the powers that be (USGA and R&A) are keen, with almost every rule, to modernise the game of golf.

In the 2019 the rules changed to allow a golfer to putt with the flag in, drop from knee height and repair spike marks, to name a just few. Once again each rule change this time tends to:

These new rules do not take effect until January the 1st 2023. The current edition of rules (2019) should be used until then.

A Closer Look at the Rule Changes

Modifications for Players with Disabilities:

The first change feels almost groundbreaking for golf. It’s the first time that the modified Rules for players with disabilities have been fully incorporated into the playing rules without the need to adopt a local rule. The change will hopefully encourage golf to be more inclusive. Rule 25 modifies certain rules for players with the following disabilities:

Hopefully this is just the start of making golf more inclusive. Products such as the Paragolfer below, are constantly being developed, to allow more and more people play golf each day.

The handicap rule is fairly self explanatory, there is now no punishment for putting the wrong (or omitting) handicap on a strokeplay scorecard. This is inline with a few other changes previously made that are encouraging millennial golfers. The increased use of software and apps for score entry means this rule makes perfect sense! While we’re talking about technology …

With the changes, the R&A Rules App will also be updated. From the middle of December 2022 all the updates should be ready. The governing bodies are spending time improving the app, with a suggestion that some 4 million fewer copies will be printed.

The app has been developed further and the new version will include:

Again the new “damaged club” ruling is fairly self explanatory. In brief you can now replace a club that is broken mid round as long as it hasn’t been caused by abuse.

The fourth change “ball moved by natural forces” in my opinion is quite niche. It’s probably not going to effect you but it’s another example of how the governing bodies are continuing to tidy up rules that just don’t work. This is a rule quite probably amended as a direct result of Rickie Fowler in the 2019 Waste Management tournament. Fowler dropped the ball under penalty. He then walked off to check his line etc and in the meantime the ball rolled into the water again which under the old rules cost him another penalty. The new rules would allow him to re-drop it in that situation without penalty.

Lastly, the final key change is to do with “Back-on-the-line Relief”. In the old rules a player could drop the ball within a one club penalty area. This rule allowed for a little bit of abuse to be honest so it has now been clarified that the player must drop on the line but the ball must rest within one club length of where it lands … even if that happens to be nearer the hole. This obviously makes sense because the player has gone back anyway so the dropped ball won’t be any closer to the hole than it started before the drop.

The R&A and USGA released this infographic to summarise the changes:

All these rule changes … but still no sign of the one change that almost every golfer wants. A rule about relief from divots! what rules would you like to see change? Please drop a comment below.

⛳️WISDOM WEDNESDAY ⛳️ This week we take a

⛳️WISDOM WEDNESDAY ⛳️ Did you know that w

👻🎃Happy Sunday🎃👻 It’s that time of