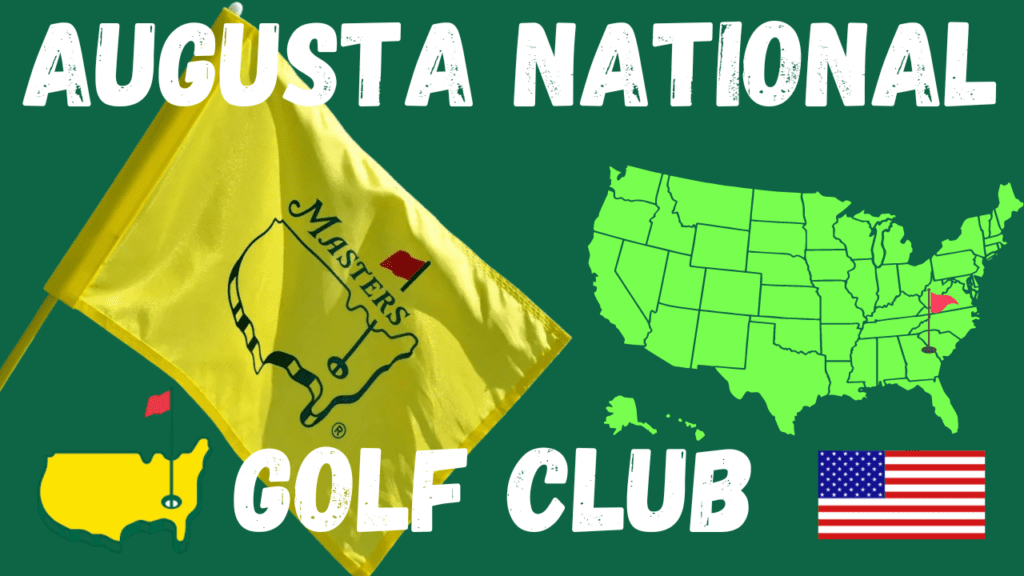 All my life I have dreamed of visiting Augusta National Golf Course. I have unsuccessfully applied for Masters tickets every year! For me it is the Holy Grail of golf, and (random fact) Augusta is the reason that the Azalea is my favourite shrub. 🌺

Located in Augusta, Georgia, Augusta National Golf Club has been home to golf’s first major of the year in the Master’s Tournament for almost 100 years.  Augusta National was first founded by the famous golfer Bobby Jones (the original holder of the “Grand Slam”) and financier Clifford Roberts in 1932 (formally opened January 1933) and hosted the Masters Tournament for the first time in 1934.  The tournament was actually started out of necessity, as the Great Depression was still in full swing at the opening of the course and the founders needed a way to generate more income and attract more people to what was a relatively minor location at the time.

Take a look around the course and local area ⬇️

Augusta National is 7,510 yards (6,867m). The course doesn’t have an official course slope index, and only has two sets of tees, the Masters tees and the Members tees.

The Augusta National Golf Club is exclusive, and doesn’t seem to have it’s own social media channels, but The Masters Tournament does ⬇

Today Augusta National is visited by tens of thousands of fans, not only for the Masters Tournament but to take in the scenery that the course has to offer as well.  The course is most known for having a seemingly perfect appearance, where nothing seems out of place. Whether it be the sand in the bunkers, or even the pine needles lining the fairways and greens of each hole.  Here are a few of the most popular questions surrounding Augusta National Golf Club.

Where did the concept of the green jacket originate?

The concept of the green jacket actually originated from one of the founders of Augusta National, Bobby Jones.  Jones noticed while traveling to Royal Liverpool Golf Club that the captains wore red jackets, and he wanted to incorporate something similar the members of Augusta National Golf Club.  Sam Snead would become the first winner of the Masters to don a green jacket in 1947.

Why do all of the golf holes have names attached to them?

One of the more iconic features of Augusta National is the use of a name for each hole on the golf course (see scorecard above), such as “Magnolia” for the 5th hole.  The names are important to note because the course was formerly a plant nursery, and as such each hole is named after a prominent tree or shrub that is featured on that particular hole.

Can anyone play golf at Augusta National?

Unfortunately, not.  Augusta National Golf Club is a private club that is only accessible to members and their guests, with the public being allowed to visit only during the Masters Tournament.  Becoming a member at Augusta National Golf Club can prove even more difficult, as membership is by invitation only and there is no formal application process.  The initiation fee is rumoured to be around $50,000 with an annual fee also of thousands of dollars on top of that.

Is it true that announcers have been kicked off the air during the Masters Tournament?

Augusta National Golf Club is one of the strictest venues among all of the professional tournaments played each year, and the strictness applies not only to fans and players but to announcers as well.  For instance, golf announcers are not allowed to use the words “spectators” to describe the crowds at the Masters Tournament, and Gary McCord in particular was actually kicked off the air for defying one of the rules that Augusta National Golf Club had set during one event. Spectators must be referred to as Patrons.

A combination of both tradition and the course itself really help to make Augusta National a special place in the eyes of many.  2023 will mark 89 years that the golf club has hosted the Masters Tournament; it is the only major event out of the four hosted each year that is held at the same golf course each time.  The course itself is not only always kept in immaculate condition, but it also has a lot of unique features such as severely undulating greens that force players to hit approach shots away from some flag positions.  It is not the longest of courses, but it does require accuracy, and can penalise golfers who go even a few feet further than where they were intending to, both off of the tees and into the greens.

While the club itself have been fairly clear that the LIV Tour, and the cloud around it, has “diminished the virtues of the game” they have fallen short of banning LIV Tour golfers from playing in the Masters. They have confirmed that The Masters will continue to welcome every golfer who has qualified for the tournament. In the full statement the club re-iterated the purpose of the Masters Tournament being to benefit the game of golf, suggesting that this is through being a fully inclusive community.

“Regrettably, recent actions have divided men’s professional golf by diminishing the virtues of the game and the meaningful legacies of those who built it,” the statement said. “Although we are disappointed in these developments, our focus is to honour the tradition of bringing together a preeminent field of golfers this coming April.”

What changes have been made to Augusta in 2023?

The most significant change for 2023 is to the 13th hole. It’s a hole that over the years, as golfers have started hitting the ball further, has become far less challenging. Big hitters have been taking on the corner, sometimes leaving as little as a wedge into the Par 5 green. The tee has been moved back some 50 yards to help counteract the increased driving distances. This is the second time the hole has been lengthened in recent history. In 2002 the 13th was supposedly “Tiger-proofed” when 25 yards were added.

This change is another attempt by the Augusta bosses to counteract the modern golf driving distances, following the lengthening of the 11th and 15th in 2022.

Looking for somewhere new to play, or want to know more about a particular golf course? Checkout our Golf Course Encyclopedia.