10/08/2022 StripeyGreenTV Golf Terms Explained, How to Articles, Rules of Golf 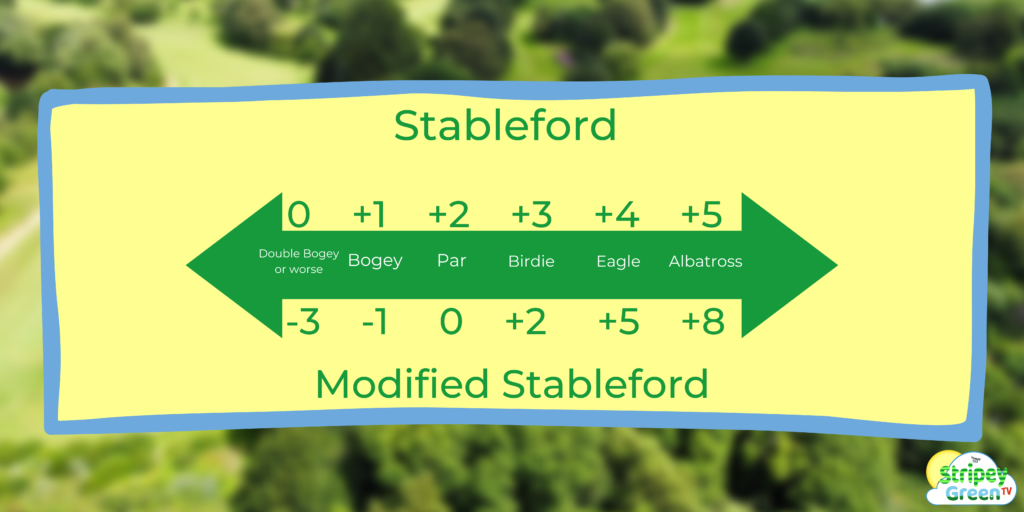 The most common format of golf competition is Stroke Play, also known as Medal Play. It is the scoring system used for most professional competitions such as the PGA Tour, LIV Golf Invitational Series, the DP World Tour (formerly known as the European Tour), and the all four of the “Major Golf Competitions”: The Masters Tournament, U.S. Open, The Open Championship, and the U.S. PGA Championship.

There are, however, many other formats of golf scoring to define the winner of a golf competition, or match, such as as Match Play, Texas Scramble, Skins, and Stableford. Often, some of these alternative formats are more inclusive for amateur golfers who lack the consistency of the average tour professional.

In the UK, the most popular of these alternative formats is Stableford. In a Stroke Play competition, the goal is to have the lowest score, but it’s the opposite in Stableford. The winner of a Stableford Golf Competition is the player with the highest score.

Stableford is widely used in social golf such as invitation and society days. Many golf clubs also use it for scoring winter golf or to mix up the barrage of summer medal competitions.

How does Stableford Scoring work in golf?

With the Stableford scoring system, golfers score points against the par of the hole. The beauty of this game is that minus points can’t be scored, which means that once a golfer has reached two shots over the net par of the hole, they can pick up their ball and move on to the next hole. Their score will be zero for that hole, but at least the golfer doesn’t have to keep playing through the humiliation of a nightmare hole!

We can all have a bad hole. When I think about nightmare holes, Jordan Spieth throwing away the Masters Tournament on the 12th hole at Augusta in 2016 springs to mind. He ended up with a quadruple bogey after two visits into Ray’s Creek. If the competition was judged in the Stableford scoring format rather than Stroke Play, then this situation would simply have been a “blob” (see below), so he may have possibly still been able to go on and win the tournament.

Most typically the classic fixed target scores are as follows:

How to write out a Stableford Scorecard

If a player needs to mark more than one score on the card, then this method might not be possible. In this case, a player can condense the score into one column. For example, if a golfer scored a four, which gave them three Stableford points, it can be written in one column as 4/3.

A golfer can usually seek advice on how best to mark the scorecard on the competition day at the course in the pro shop or the starters hut.

The History of Stableford

Wallasey Golf Club is recorded as the venue for the world’s Stableford Golf competition on 16th May 1932.  The Stableford format was the brainchild of Dr. Frank Barney Gorton Stableford (1870–1959), which is why we see the capitalisation of the S when referring to Stableford.

In 1898, while briefly a member of The Glamorganshire Golf Club (“The Birthplace of the Stableford Scoring System”) in Penarth, Dr Stableford had devised and used a scoring system modified from a Bogey Competition (invented in 1891) to calculate the winner of the day. The system he used that day was deemed unsatisfactory. Clearly, this method took a while to refine. It was some 34 years later that the world’s first Stableford competition was held in 1932.

Dr Stableford was reported as saying: “I was practising on the 2nd fairway at Wallasey Golf Club one day in the latter part of 1931, when the thought ran through my mind that many players in competitions got very little fun since they tore up their cards after playing only a few holes, and I wondered if anything could be done about it.”

For me, this method of play is the beauty of the Stableford format: it keeps the golfer interested throughout the round and one bad hole doesn’t end a golfer’s day. The strong winds at Wallasey Golf Club can easily ruin a round when playing another format of golf, and so it makes perfect sense that someone would want to find a more inclusive scoring method. Dr Frank Stableford later became an honorary life member of Wallasey Golf Club.

How do Handicaps Affect Stableford scoring?

The slightly complicated part of Stableford scoring is dealing with a player’s handicap. The number of points awarded on each hole is determined by the number of strokes taken to par after a golfer’s handicap for that hole is removed.

The handicap for the hole is removed prior to calculating the Stableford score. In the examples above, if playing a par 4 hole that is stroke index 5, Player A will deduct one shot and Player B would deduct two shots from their final score. If the players were to both score a 5, then Player A would score 5 net 4 to receive 2 points (par) and Player B would score 5 net 3 to receive 3 points (birdie).

There are various apps available now that will automatically calculate your Stableford score for you (Outings, VPAR, and 18Birdies, for example). Some of these apps can also offer live scoring so that anyone can login and see the leaderboards and scores while a player is still playing, which can be really handy if running a golf society day, for instance.

What is a good Stableford Score?

If a golfer plays the course to level par once their handicap is removed, they will score at least 36 points. Depending on conditions a good score is therefore usually one in excess of 36 points. A great score would be one of 40 points or more. Personally, I always think of a score over 30 points is respectable.

What is a Blob in Stableford?

In the UK, the term “Blob” is affectionately given to a zero point score on a hole when playing Stableford. A golfer may say at the end of the round, “I played okay but I had three blobs” or during a round, “oh, that’s my first blob.” A blob is therefore a score of more than one over the par of the hole after removing any handicap a golfer receives on that hole.

What is Modified Stableford Scoring?

Modified Stableford, as the name suggests, is a slight variation on standard Stableford Scoring. In the modified version, players can lose points, as well as gain them.

Modified Stableford is scored based on the number of shots taken on each hole:

Stableford golf is a fun scoring system that is inclusive to all levels of golfer. It’s particularly useful for tournaments where competitors standards are of a wide range. Unlike a medal competition, Stableford gives every gofer in the field a more even chance to win. Also, when a golfer can’t score on a hole, they can pick the ball up. Picking the ball up helps to also improve the speed of play and takes the pressure away from having to hole out.

Stableford does often favour the higher handicap golfer because a golfer can have two or three “blobs” in a round and still win. This format also encourages more exciting shots. In medal competitions, it’s unlikely that a golfer would take on a very risky shot for fear of ruining their scorecard. With Stableford, it might be worth the risk for a very high score, since the worst that could happen is the golfer scores zero on that hole.

If you’ve found this article useful, why not checkout our other “How to Article.”

**UPDATE** When I shared this article on social media I asked my followers what their best Stableford score was and commented that my best ever score was 43 points but that it was many years ago and my best in the last two years was 39 points … and then the very next day I went out and scored 46 points! Golf is crazy. It came completely out of the blue.