First Week Back to Golf After Lockdown 3.0 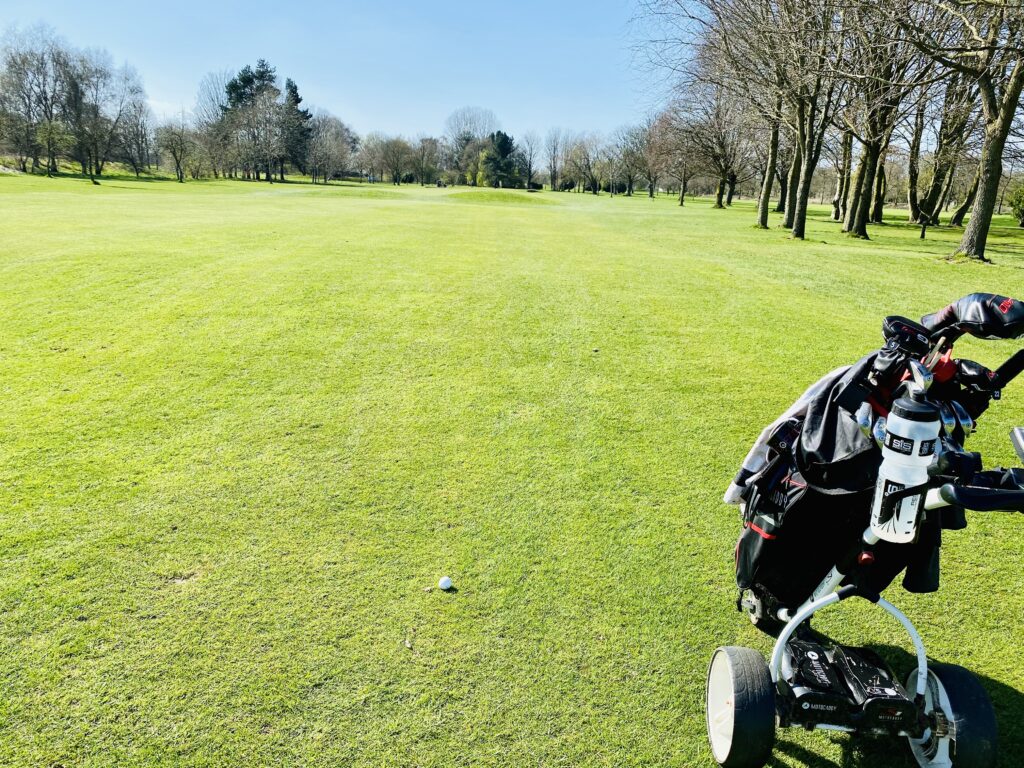 As the dust settles on my first week back to golf after the 118 day break enforced on us by the pandemic, I thought I’d write a quick update on my progress. It’s been a real roller-coaster of a week. Sadly it ended at the bottom of the track, stuck on the sofa rubbing Voltarol into my back!

After one week back I’m already out of action. I managed to get 54 holes in last week. I played 18 on Monday, Good Friday, and again in Saturday’s competition at Flixton Golf Club. Then on Sunday I was pottering around in the garden, moving some pots about, bent down to reach something and ping … my back went. This happened to me once previously this year, again while doing nothing particularly strenuous. That time I was putting my socks on and the worst of the pain lasted for about 48 hours. I’m hoping this will be much the same again this time.

This time I struggled from the bottom of the garden and into a hot bath and have spent the 40+ hours since then either in bed or on the sofa. To round off my bad luck I then woke up this morning with an abscess … just as the pain from my back was starting to ease.

Pretty rubbish end to last week and start of this one. Hopefully by the end of this week I’ll be back swinging again.

Anyway, back to the golf. As I said I played three times, the first round on Monday felt dreadful. My swing was all over the show and my usually strong putting stroke, let me down badly. I missed 7 very makeable putts and duffed 4 chips, yet still came in 5 shots under my handicap … which was promising!

Tuesday evening I managed to get onto the practice area and work on my distances. I took out my four wedges and hit around 200 balls to work out my distances with a full swing, 3/4 swing, 1/2 swing and 1/4 swing. Hitting 10-15 balls with each club and each shot type, I worked out roughly where they ended up and then used my PeakPulse Rangefinder to zap the distance.

This was purchased last year, and I was a little wary of how good it would be since it is much cheaper than the typical rangefinders I’ve seen which are often £200-400. I love it and I’ve tested against my friend’s more expensive models and it seems to be just as accurate. If you haven’t used one, I’d highly recommend it. When I bought mine it was under £80 from Amazon. You can read my full PeakPulse Rangefinder Review here.

Once I’d zapped all my distances, I put them in a handwritten table for now on a piece of paper to keep with in my Torro Scorecard Holder to refer back to as I’m playing. This is very much a draft document that I imagine I’ll update regularly with more accurate measurements and once I have done all my distance gapping, I’ll transfer it onto my Pin Mapping Distance Cards.

The Proof is in the pudding

On Friday I had my first round with my new “distance tool” in hand and it paid off on my third stroke of the day! As you can see from my Arccos screenshot below, I was 70 yards away from the pin.

Usually I’d be guessing what club to use, but having done my yardages the other day, I stood over the ball confident that a PW with a 3/4 swing would go around 70 yards. It worked a treat and because I was coming across the green from out on the right, I’m pretty sure without it I wouldn’t have hit the green or stayed on it. The distances in my table are carry distances with a steady swing. These will give me more confidence in situations like this, where I’m having to hit over an obstacle. I felt I played a lot better on Friday, but actually ended up with the same score as Monday, 5 under my handicap.

So after two relatively good scores by my standards, I went into Saturday’s competition full of confidence … and it all started reasonably well, 5 over after five holes which is a good start for me. We were playing medal so my playing handicap was 25 (95% of my WHS (22.4) + Slope) which meant that I still had 20 shots left for the remaining 13 holes.

This though was where the wheels started falling off. I scored four 6s on the trot followed by an 8 and another 6. 14 shots dropped in six holes, leaving me with six shots for the remaining six holes. Throw a 7 and another 8 into those last six holes and I ended up with a 99 gross, nett 74. Not my finest hour that’s for sure, but also not a complete disaster considering it was my first round off the white tees for the best part of four months. I also managed to improve my best ever score!

I decided this week not to take many pictures or videos and just to concentrate on my golf. It’s a bit of a shame I didn’t take a picture of where my third shot on the tenth hole ended up. I’d hit a good drive and then caught a flyer with my second into the recently cleared area behind the 10th green. I tried to chip back through the trees and unbelievably my ball stayed in one of the trees … and when I say trees, I mean twigs. I’ll re-enact it and take a picture next time I’m there, you wouldn’t believe it could had stayed up there. Moving forward I’ll be getting the camera out more and VLOG-ing as and where I can.

Talking of balls, as I was the other week in my “What Golf Ball Do I Use?” post, this week I used the same ball for the first 42 holes. I used a Srixon Ultisoft ball. It was one that I had kicking around in the bag but I really liked it. It felt soft enough around the greens but also seemed to travel well in the air and my 5 wood certainly picked it up well from the fairways. Sadly on the 42nd hole it decided no longer to want to stay on the course and hasn’t been seen since.

So in summary the first week back to golf was a real mixed bag. A couple of good scores earlier on in the week, followed by a distinctly average competition score on Saturday. Unless my back miraculously recovers overnight, it doesn’t look like I’ll be hitting too many balls this week, but hopefully I’ll be fit again for Saturday’s competition.

Hope you all have a good week and are able to get out on those fairways!